It’s been almost four months since MAZA expanded to a second district, Bunkpurugu-Yunyoo (BY), which is in the northeast corner of Northern Region, Ghana. BY district has a population of almost 146,000, about 86% of which live in rural areas. We began with a network of 12 motorized tricycles serving three of the five sub-districts, which represent about two-thirds of the district’s population. Demand for our urgent/emergency health care transportation service in BY has been strong so far – we have served 138 passengers in less than four months. This is 44% higher than the total number of similar passengers (96 people) we transported in the first 12 months of operations in our first district, Chereponi, also in the Northern Region. Watch our latest video for the lessons we learned in Chereponi and how we incorporated them to improve our model in BY. Detailed results for BY are provided below.

In contrast to our operational model in Chereponi District where we initially recruited individual pregnant women as subscribers at the health facility level and followed up with home visits a few weeks later, in BY District we are focusing exclusively on community-level education and outreach. This is because we found no additional benefit in the individual subscription approach despite several incentives and visits to the homes of the individual pregnant women.

During these community-level engagements, we usually gather about 50 or more community members in a central location to learn about their current means of emergency health transportation. We inform them about MAZA’s services including the fact that our service is free for pregnant women, postpartum women and sick infants. We also emphasize the need for early decision-making about seeking medical attention for labour cases and other serious health conditions in order to avoid delays that may result in complications 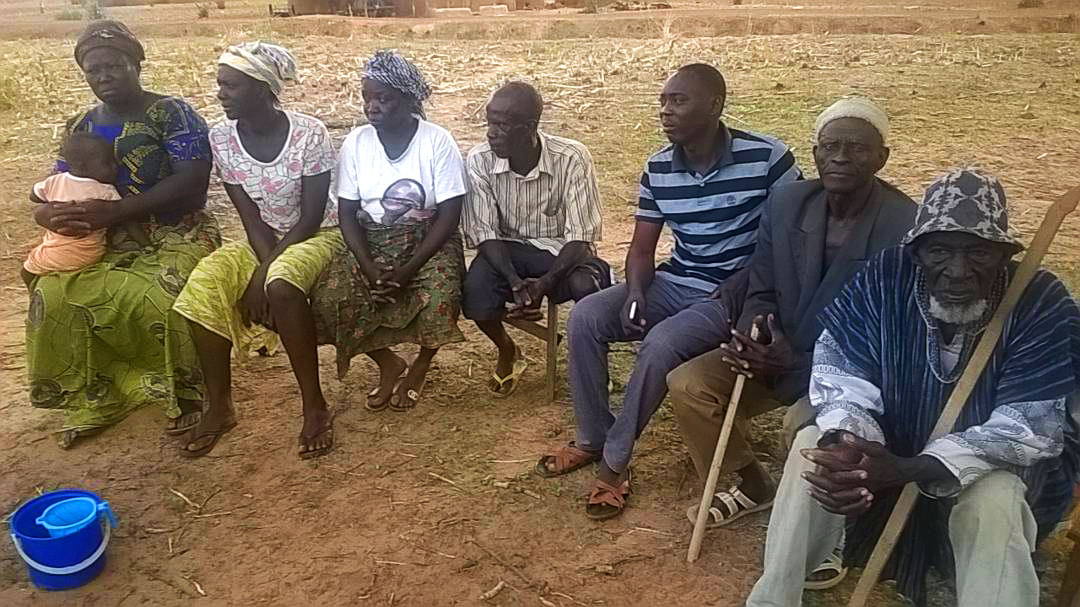 Since our launch in BY on April 12, 2017, MAZA drivers have conducted a total of 128 urgent/emergency health transportation rides in which they enabled 138 people in BY to get to a hospital or health center in a timely manner. The shortest distance travelled for an emergency transportation was one kilometre, while the longest was 44 kilometres. Our highest usage for urgent/emergency health rides was 20 passengers in Week 7 while our lowest was two passengers in Week 13 (see Figure 1). 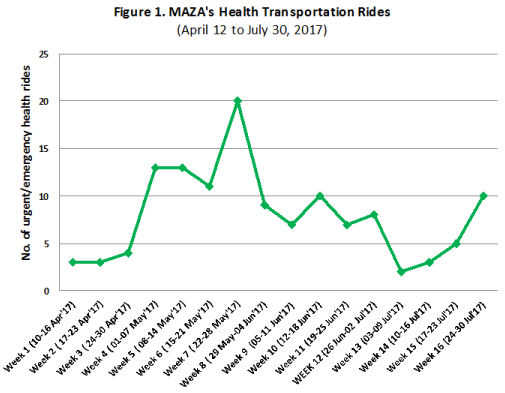 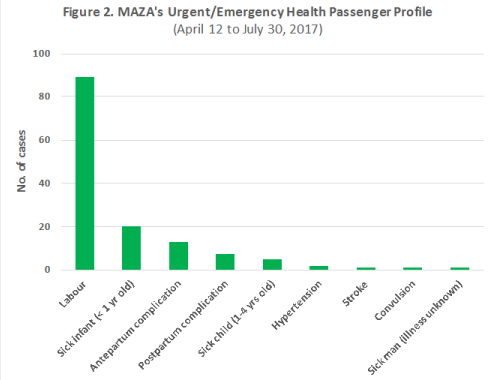 As shown in Figure 2, the most common conditions for which our service was used were: labour (n=89, 64%); sick infant (n=20, 14%); and pregnancy-related complications in the antepartum (i.e. before birth) period (n=13, 9%) and the postpartum (i.e. after birth) period (n=7, 5%). All four of these conditions are within MAZA’s focus area for which our service is provided free of charge. Fee-paying passengers (i.e. not pregnancy-related and non-infants) comprise only 8% (n=10) of our passengers so far. 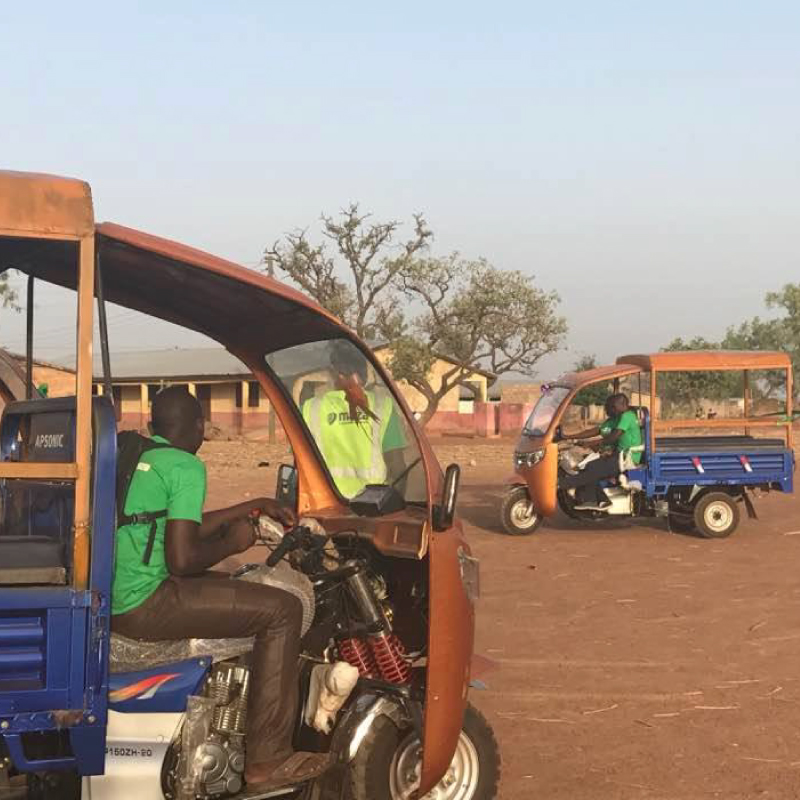 All 12 MAZA drivers operating in BY district have been involved in transporting people to a hospital or health centre on an urgent/emergency basis. The average number of cases per driver in the 16 weeks that we have been operating in the district is 11 and the range usually falls between two to 25 cases. We are yet to study the potential reasons behind this wide variation, though anecdotal evidence so far suggests that some drivers have been much more active in community education and promotion of their services than others.

Consistent with MAZA’s operational model, our drivers have also been using their motorized tricycles for commercial purposes on their off-duty days to earn a living and pay off their loans to MAZA. Loan repayment rates have been lower than 70% since we began working with this group of drivers. Reasons given include relatively low patronage of transportation to the market during the rainy season since a large proportion of the population are busy on their farms as well as diversion of income into servicing and repairs of their tricycles given the poor condition of the roads. We are working with the manufacturer of the tricycles, Apsonic, to determine whether the problem is with the tricycle itself, is due to the usage patterns of the drivers or as a result of driving on the harsh road conditions typical of the remote rural areas of the Northern Region. We are also re-engaging with the chiefs and other community leaders who helped us in the interview and selection of the drivers to address the low loan repayment rates.

MAZA was nominated for the 2017 Premium Bank Ghana Startup Awards in the Health category in July 2017. The Awards Ceremony was held in Accra on July 14, 2017. Unfortunately, we were not selected for the award but we were pleased to be inducted into the Ghana Startup Club 100 along with other Ghanaian start-up companies in a range of sectors including health, education, agriculture, manufacturing and fintech. This club promises to open a lot of networking and fundraising opportunities to MAZA in the future. 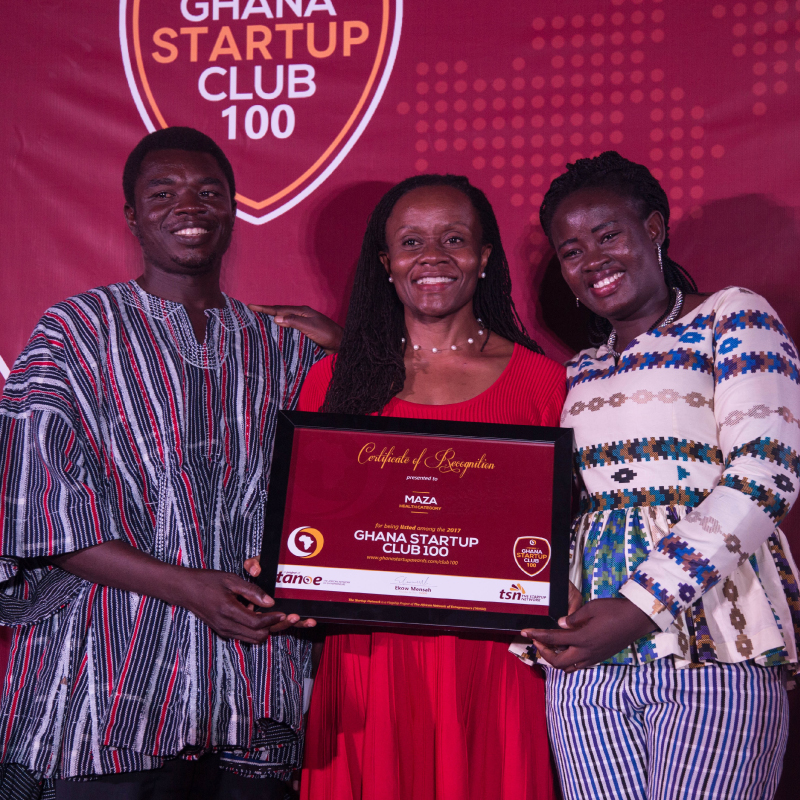 We invite you to spread awareness about MAZA by sharing our stories on Facebook, Twitter, and Instagram and support our operational costs with a donation. No amount is too small.

The author is the Founder and Chief Executive Officer of MAZA. She can be reached at ntwumdanso@mazatransport.org.