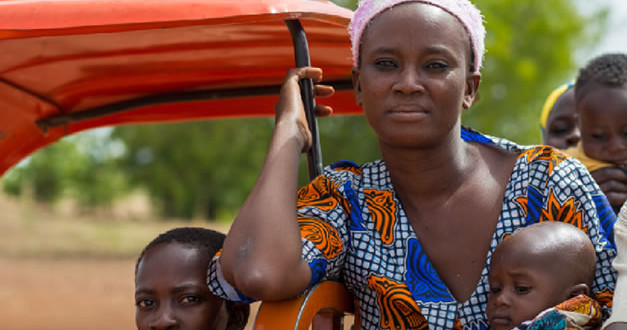 MAZA is ten months into operations already! We are making good progress on several fronts. We are also learning so many things about our model that we did not expect and are adjusting as needed to improve our service. Join us as we share our journey so far with you.

As of October 31, 2016, MAZA drivers had made 77 urgent or emergency health care transportation rides that enabled 86 people in Chereponi District, Northern Region of Ghana, to get to a hospital or health center in a timely manner (Figure 1). Consistent with our outreach to pregnant women, the majority (60%) of our passengers have been sick newborns and women in labour or with complications following delivery at home such as postpartum bleeding (Figure 2). Seventy-four percent of our passengers so far have been female. The most common destination has been the Chereponi District Hospital (96%). 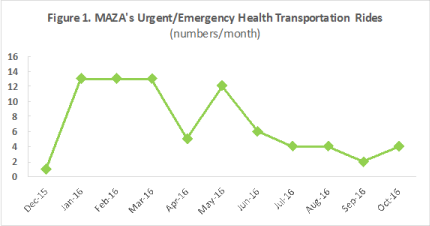 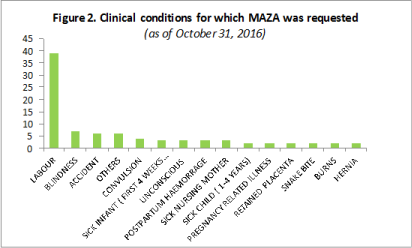 We have subscribed 537 pregnant women to our service; this number represents about 30% of the estimated number of pregnant women in the rural areas of Chereponi District (n=1817). Of these 537 women, we know the actions taken at the time of labour for the 505 of them who have already delivered while five are still pregnant, 12 have migrated to different communities and 15 are untraceable. We have visited 510 (95%) of them at home at least twice to meet with them and their extended families to discuss their birth preparedness plans, including transportation when labour starts.  From our records, we know that 49.5% delivered at home, 46.5% accessed skilled health care at a hospital or health center while 4% delivered on the way to the health facility (Figure 3). Pregnancy outcomes for the 505 women who have delivered are good, especially for maternal deaths and stillbirths where there have been only two of each (4 per 1000 live births or less than 1%). Both maternal deaths occurred at home while both stillbirths occurred in a health facility. There have also been 10 newborn deaths, one half of which occurred at home. 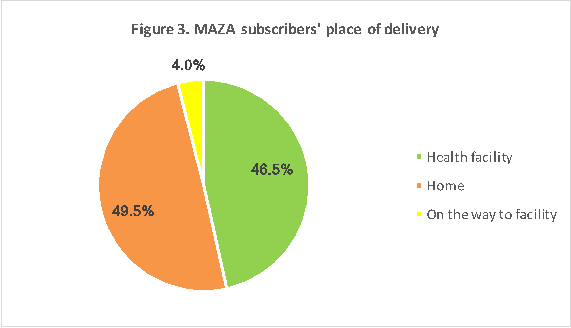 It is encouraging that more than half of our subscribers succeeded or tried to deliver with skilled health care given that the district average for skilled delivery in 2015 was 42%. However, only 31 of our 537 subscribers (6%) used one of MAZA’s vehicles to access skilled health care. We have followed up with almost all of them to find out more about the circumstances around the time when labour started and their rationale for calling us or not.

For those who delivered at home, the most common reasons given were that labour was so precipitous that the baby came before they could call us, labour started at night and they were not sure that they could access a MAZA vehicle at that hour, and their husband was not around to make the decision.  In addition, there seemed to be a concern about the price of the service since they had typically not saved ahead of time either by cash or mobile money; this issue was compounded if their husband was not at home when labour started. For those who delivered in a hospital or health center but did not use MAZA’s vehicle, they told us that: 1) they heeded our advice to go to the hospital or health center early in the labour process, in which case they could walk or sit on a motorbike and thus, did not need the MAZA tricycle; and 2) they did not know how long it would take after they called the MAZA dispatch number or MAZA driver before our vehicle would arrive so they decided to go with their husband’s or a neighbor’s motorbike instead of taking a risk on waiting for us. And for the few subscribers who used MAZA’s vehicle at the time of labour, it was clear that that was always the plan and that the price was not a barrier. Finally, for pregnant women who were not yet MAZA subscribers but used our vehicles, we learned that we were their only means of transportation to get to the hospital when labour started and often, they lived in the same community as a MAZA driver.

On the other hand, we have been pleasantly surprised about the relatively large percentage (40% or 34 out of 86) of our passengers who do not fall within our target populations (Figure 2). We have been learning more about them too and exploring the extent to which we should be broadening our approach to intentionally include them.

Based on these findings, we have been making important adjustments to our operational model:

Driver loan repayments to MAZA have been erratic in the last few months. This is partly attributable to the reduction in demand for transportation to local markets and of produce from farms during the rainy season as the majority of the population is busy on their farms. Thus, we agreed with the drivers to reduce their loan repayment requirement during the rainy season and increase it during the harvesting and dry season. Harvesting began in October so we expect to make significant improvements in debt recovery by the end of this calendar year.

MAZA has been invited to present its work at international conferences twice in the last few months: the second Future of Health Conference in Abuja, Nigeria hosted by Nigeria Health Watch, which had as its theme “Health meets Tech” in September 2016 as well as in the panel on The Power of Cross-sector Partnerships in Philanthropy at the African Philanthropy Forum in Rabat, Morocco in October 2016. Both conferences were excellent opportunities for MAZA to showcase our innovative operational model, including successes, challenges and pivots along the way. Finally, by the end of October 2016, MAZA had gained more than 6000 followers on Facebook and almost 200 followers on Twitter who hail from all over the world.

In July, MAZA contested as a finalist in the Saving Lives at Birth Grand Challenge for Development, in Washington DC, USA but we failed to win a grant. However, three months later we have had two successes. We finished fourth place in the Clearly Vision Prize finals that took place in London, UK and were one of eight organizations to win an innovation grant from the USAID Systems for Health Project in Ghana. The former will enable us to explore how to further leverage our network of motorized tricycles for “last mile” services in Chereponi District while the latter will enable us to scale up to a second district in Northern Region. For the innovation grant, which amounts to almost US $150,000, MAZA is required to provide 1:1 matching funds. We have already secured half of those funds, including from the Echoing Green Fellowship support for our founder and CEO. Thus, we are raising funds for the additional US $75,000 by the end of December 31, 2016. We have just launched a fundraising campaign on Generosity, Indiegogo’s non-profit crowdfunding online platform. Please help us meet our matching fund goal so that we can access the full grant amount from USAID by donating at https://igg.me/at/h-fKmH-2R2c.

MAZA is moving! Join us to save lives through timely access to health care (#savinglives):

The author is the Founder and CEO of MAZA. She can be reached at ntwumdanso@mazatransport.org.