No woman should suffer the pain of losing a newborn or her own life for that matter – especially when such loss is preventable. Delays in securing transportation to a health facility once labour starts can lead to serious complications, and even the death of the mother or child or both in the worst case scenario. MAZA was established two and a half years ago to address this critical issue with our network of motorized tricycles in the remote rural areas of northern Ghana. Several milestones have been achieved since then. Last month we  celebrated our first anniversary in our second district, Bunkpurugu-Yunyoo (BY), Northern Region. Below are a few highlights of our progress so far in BY.

MAZA’s tricycles in BY continue to serve people in need of urgent or emergency transportation to a health care facility, especially pregnant women, postpartum women and sick infants. As of May 20, 2018, MAZA drivers had transported 340 passengers through 305 emergency rides to healthcare facilities since we launched in BY in April 2017 (see Figure 1). The majority of the rides were from remote rural communities to the nearest health center. However, on several  occasions, our drivers were requested by midwives to transport critical cases (e.g. excessive bleeding requiring transfusion or obstructed labour requiring surgery) from health centers to Binde Hospital when the district ambulance was non-functional. 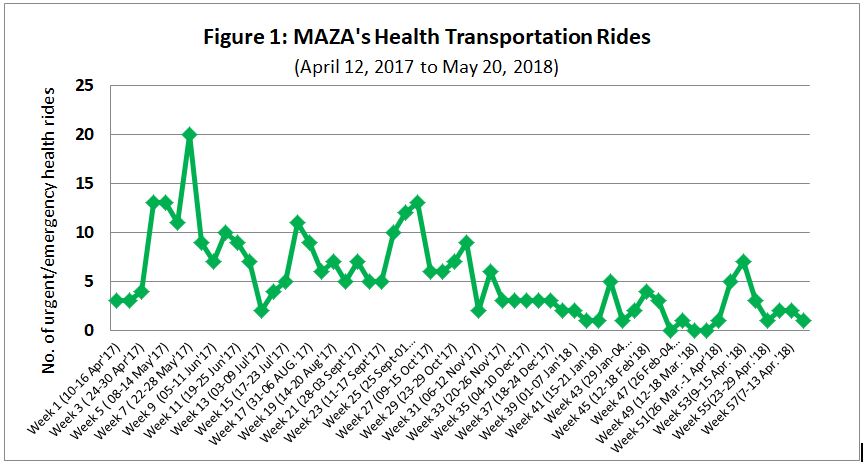 The most common conditions for which MAZA drivers were called upon were labour (58%) and sick infants (18.5%) while antepartum (i.e. before labour) and postpartum (i.e. after labour) complications together constitute less than 15% of our cases (see Figure 2). Emergency/urgent transportation for any of the above conditions are provided free of charge by MAZA. 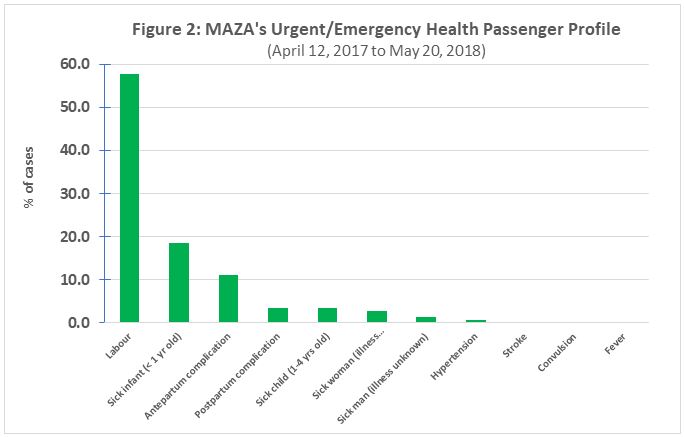 Bumps on the Road

As shown in Figure 1, weekly frequencies of emergency health rides reduced substantially during late 2017/early 2018. This was due to two primary reasons: (a) confiscation of three tricycles following persistent non-payment of loans by MAZA drivers; and (b) engine breakdown in four tricycles due to poor servicing habits and use of cheap and incorrect spare parts on the part of drivers. To address these problems, MAZA worked closely with the tricycle manufacturer, Apsonic, in the first quarter of 2018 to secure heavily discounted prices for new engines to enhance the purchasing abilities of our drivers. This was followed by an intensive training program for MAZA drivers in March 2018 to ensure that they are better equipped to take good care of the tricycles and adhere to sound financial management practices.

The training, which was facilitated by staff from MAZA, Ghana Health Service and Apsonic, focused on basic first aid management, defensive driving, road safety, maintenance and servicing of the tricycles, spare parts specifications and markings as a well as entrepreneurial and basic financial management skills. Since then, loan repayment rates have improved substantially as drivers are now able to use the tricycles for commercial purposes again. The average repayment since the first week of April 2018 to date has been 55% compared to an average of 7% in the first quarter of the year (see Figure 3). Likewise, we are beginning to detect a slight but encouraging increase in the weekly frequency of emergency/urgent health transportation since late March 2018 (see Figure 1).

In January 2017, a baseline survey was conducted in BY by MAZA’s independent evaluator, the School of Allied Health Sciences at the University for Development Studies in Tamale, before the project was officially launched in April 2017. A year later (March 2018), another survey was conducted to evaluate the effects of MAZA’s service in BY. They conducted key informant interviews of health workers, household interviews of families of pregnant women and infants as well as focused group discussions with farmers and traders to ascertain their views on MAZA’s operations in their subdistricts and suggestions for improvement. One of the key findings when comparing baseline and endline survey data was that skilled delivery has almost doubled from 49% to 95% in just about one year. There is much to celebrate! Further analysis is ongoing; final results will be shared as soon as they are available.

MAZA is partnering closely with the local communities, the Ghana Health Service, the Ghana Ambulance Service and the Navrongo Health Research Centre which is testing a similar intervention in two of the sub-districts. Both MAZA and NHRC were funded by the USAID Systems for Health Project in Ghana from late 2016 to early 2018. MAZA’s grant from USAID ended on April 30, 2018.