MAZA is seven months into operating in our second district- Bunkpurugu-Yunyoo (BY), located in the northeast corner of Northern Region, Ghana. We have 12 motorized tricycles positioned strategically in three of the five sub-districts of BY that are inhabited by an estimated population of 92,000. Two of the sub-districts have a health centre each, while the third has a hospital where comprehensive obstetric and neonatal care can be provided. About 3,700 women are expected to be pregnant in this catchment area in any given year. MAZA is partnering closely with the local communities, the Ghana Health Service, and the Navrongo Health Research Centre which is testing a similar intervention in two of the sub-districts. Both MAZA and NHRC are funded by the USAID Systems for Health Project in Ghana.

Since MAZA began operating in BY in mid-April 2017, our drivers have conducted 245 urgent/emergency health care transportation rides, during which 275 individuals were transported to local hospitals and health centres (see Figure 1). About 90% of our passengers were in our target population of pregnant women and sick infants (see Figure 2). The most common conditions for which our drivers were requested include labour (58%), sick infants (19%), complications in the antepartum (i.e. before delivery) period (10%), and complications after delivering at home such as bleeding or placenta retention (4%). On average, our drivers transported one person per day to a hospital or health center for emergency/urgent health care. On a per driver basis, the average number of rides for the 7-month period that we have been operating in BY is 20. The average distance travelled round-trip was 26 kilometres (range 4 to 88 km).

In the past two months, we have interviewed 105 of our 275 passengers. This represents a little over one-third (38%) of our passengers, to learn about their experiences with MAZA’s services (specifically, our toll-free number, drivers and vehicles) as well as to hear their suggestions for improvement. Surprisingly, more than three-quarters of those interviewed reported that they reached the MAZA driver by asking a family member to run or walk to his house while 18% contacted him by mobile phone and fewer than 3% accessed the driver through MAZA’s toll-free number. A reassuring 95% to 98% of those interviewed rated the drivers as “a lot” or “very” on our four key criteria of safety, timeliness, helpfulness, and friendliness (see Figure 3). 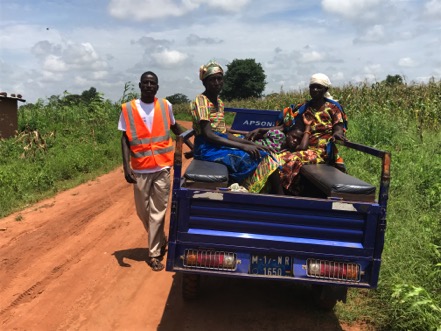 MAZA driver, Dalabri, transporting Cecilia Jijiri (in labour) and her mother to the nearest health centre.

With respect to perceptions of the MAZA vehicles, 94% and 92% of those interviewed, rated them as “good” or “very good” on safety and comfort respectively. The most common suggestions for how MAZA could improve its service were: (1) having an additional motorized tricycle available in their community in case the current tricycle was unavailable; (2) including a car in our fleet so the journey could be more comfortable; 3) a mattress or foam to lie on so they can be more comfortable; 4) a canopy to provide shade as some drivers have removed the shade that was installed on the MAZA vehicles before leasing them. Finally, 98% of those interviewed stated that they are likely to use MAZA’s vehicle again next time they need to get to the hospital on an urgent or emergency basis.

None of the 159 labour cases that MAZA drivers transported to a hospital or health centre in the past seven months resulted in a maternal death or stillbirth. However, there have been five newborn deaths in total (~3%), all occurring during the first week of life – two at home, two in the hospital, and one on the way to the hospital. The two hospital-based deaths occurred in one of the families we interviewed during the passenger experience surveys and thus we were able to ascertain the circumstances of the deaths. The woman delivered at home resulting in the birth of one live twin, at which point the family decided to seek emergency health care. They called their local MAZA driver who transported them promptly to the nearest health facility where the second twin was delivered safely. However, both babies died soon thereafter. It was unclear why the family did not seek health care as soon as labour started. Lastly, all the neonates who fell sick at home whom we transported to health facilities were successfully treated and returned home alive.

An important component of MAZA’s operational model is that our drivers use the motorized tricycles for commercial purposes on their off-duty days so that they can earn a living and pay off their loans to MAZA. However, loan repayment rates continue to be low (<50%). Thus, in keeping with our agreement with the drivers, we have begun to confiscate the vehicles of repeat loan defaulters in order to escalate the negotiations about repayment plans. We have also engaged the drivers’ guarantors and community leaders who were part of the driver selection process to help improve the repayment rates.

MAZA’s Founder and CEO, Dr. Nana A. Y. Twum-Danso was a panelist during Echoing Green’s Annual Summit in San Francisco, California, last month. She spoke about blended capital options for social enterprises in Africa, including the opportunities and challenges for non-profit organizations such as MAZA. As we near the end of the calendar year and the traditional season of thanksgiving, celebration and sharing, we urge you to include MAZA in your plans for charitable donations. Your financial contribution will help us expand our life-saving work to the remaining two-sub-districts in BY in 2018. Please visit our Donation Page for options. No amount is too small. Thank You! 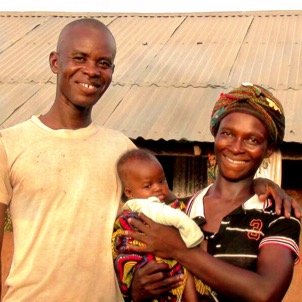 MAZA passenger Yennu Afia, with her husband and new baby