Abiba Kojo had always had difficult deliveries. Of her six pregnancies, five children had been born: three alive and two dead. Although she lives just a stone’s throw from the Busunu Health Center, she never went to the clinic when she was pregnant with her first child, and she delivered at home. However, she did go to the clinic for antenatal care for her second child, and the midwife came to her house to deliver the baby.

For this pregnancy, the midwife, Martina Naangmentoma, was totally clear with her from the start: she should deliver this baby at the hospital. Not only had she been through several pregnancies, and several difficult deliveries, but one of her children had been born by caesarean section. According to Martina, this current pregnancy had to be delivered at the hospital for the safety of mother and baby.

But Abiba resisted. “She said no,” Martina explains. “She would come and knock at the clinic door, and deliver here with me. And I told her, ‘If you come and knock at my door, I will call the ambulance straightaway for you.’”

Martina persisted. “I went and met the mother-in-law,” she says. “She asked me why I was insisting on the hospital. I explained to her. She told me that I had delivered the other baby just fine.”

In spite of Martina’s efforts, when Abiba went into labor she didn’t call her or come to the clinic. “I went to Damongo and [had] left my insurance card behind,” Abiba explains. “So when the labor started, I couldn’t go to the hospital without the card.” What’s more, her labor pains started in the night, when it is especially difficult to get transportation to Damongo, the district capital, or Tamale, the regional capital. And Abiba did not have money for the ambulance – an expensive 20 Ghana cedis (about US $14 at that time) for the 80-kilometer drive, over rough road, to Tamale. 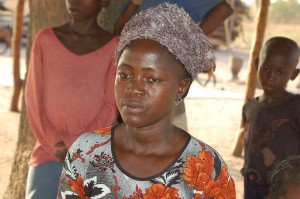 Abiba tried to deliver at home, but she could not. She labored all day long and into the night. Just before midnight, she called an ambulance. The ambulance driver insisted that she proceed to a clinic and he would pick her up from there, as he was not sure he could find his way to her exact house in the village. She followed his instructions and was picked up by the ambulance just outside the clinic. At the hospital, Abiba was in a lot of pain. “When I pushed out the baby, it could not breathe very well,” she says. “He lived until the next morning, and then he passed away.”

The next morning, when Martina asked who the ambulance had come to pick up in the middle of the night, she learned it was Abiba. When she called the hospital to inquire about Abiba, the news was difficult. “They told me that she had the baby severely asphyxiated due to the delay,” Martina says. “But they were fortunate that [even though] they lost the baby she was fine.”

Several months later, when Martina gets to this point in telling the story, she chokes up with tears. “I don’t know why she insisted on staying at home,” is all she can say.

“I used a red pen,” she says, still going over it in her mind. “I was writing in her antenatal card that she should deliver in the hospital. And I told my colleagues that I’m referring this woman. But she still refused.”

“Although she lost the baby, it was also painful for me because I lost my baby,” Martina continues. “But it equally serves as an example to the community. Because if she had been able to deliver that baby at home, they would have said that it wasn’t necessary to go to the hospital. I told her to deliver in the hospital from day one. And she lost the baby. So it equally serves as a lesson.”

Martina’s pain is palpable, as is her commitment to saving the lives of the pregnant women of Busunu and their babies. But certainly Abiba’s grief is sharp, as well. Sitting with her three living children, Abiba has this to say: “I would never repeat such a mistake. The next time I am pregnant, I will definitely go to the clinic for antenatal care early. I will follow the instructions of the midwife to save my life and the baby’s life.”

Sadly, it took the loss of this baby’s life to change her mind.