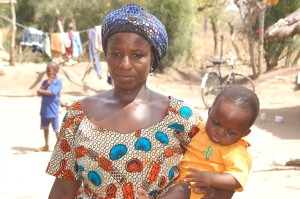 Stella Wullobong’s labor pains started at 4:00 am on the morning of August 29, 2009. Rain was falling hard, in the middle of the rainy season, in the remote Somboro area of the Upper West Region of Ghana. “I got up and my stomach was turning,” Stella explains. “Unfortunately, the rain started and I couldn’t go [far].” But Stella, age 35, also knew she couldn’t deliver the baby at home. After going through 11 deliveries – one dead, one miscarried, and nine live babies – Stella was at high risk of complications in any subsequent deliveries.

Stella was well aware of this, because she had received her antenatal care at the CHPS (Community-based Health Planning and Services) Zone in Somboro – several miles down a rugged footpath from her family compound deep in the bush. During Stella’s antenatal care appointments, the two community health officers (CHOs) living at the CHPS compound, Felix Dabuo and Bertinus Dery, had educated her that she must come to the compound at the first signs of labor.

That rainy morning, Stella and her husband set out, walking over a path that is rugged in the best of circumstances but that was treacherous on that day. The rains had flooded the paths, making it difficult to even see the path in many places. But they pushed on; when they arrived at the CHPS Zone, they were surprised. “I struggled down to the clinic,” Stella explains. “But unfortunately for me, the nurses had gone.” Felix and Bertinus had gone to Maluu, a suburb of Somboro, to conduct home visits for health education.

There the CHOs received a phone call from Stella’s husband, informing them about his wife’s condition. “Upon receiving the message,” Felix explains, “we immediately concluded our visit and quickly returned to attend to our client.” Despite the heavy rain and extremely poor road conditions, Bertinus and Felix knew that they should not attempt to deliver the baby because of Stella’s history of multiple deliveries. “The delivery should be performed at a health center by a midwife or a gynaecologist,” said Bertinus, “as delivery may involve complications. So we decided to take her on the facility motorbike to Sabuli Health Center, our mother [sub-district] facility.”

The untarred road from Somboro to Sabuli is usually waterlogged and impassable in the rainy season – a condition referred to by people in the north of Ghana as “overseas.” On this particular day, the road was worse than usual. “We started on our journey,” Stella recalls, “but the road was full of water. So we struggled again.” At one point, the road was completely washed out. “There was a big bridge,” Stella explains. “In that place the water was overflowing. We went ahead a little, but the moto stopped.” 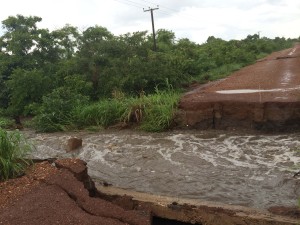 How did they cross the stream? “People from the community met us at the river to help us get across,” according to Felix. “We didn’t know where the route was. But the men came and they helped us to cross.” They carried Stella and the motorbike while wading across the bridge.

“I went through hell in order to send Stella to Sabuli,” Bertinus explains. “I had a flat tire on the muddy pathway, which was also characterized by bushy shrubs and grasses.” Bertinus had to call Felix and ask him to bring the other motorbike, because the weather made it impossible to repair the flat tire. “Thanks to our District Director who provided us with two motorbikes,” Bertinus said. “Otherwise, we would have sunk deep into troubles.”

Bertinus and Stella persevered, and finally managed to arrive at the health center. On arriving, they had another surprise. “Having gone through hell to get to Sabuli,” Bertinus explains, “we were in shock at the community health nurse’s declaration that the midwife was absent.” All that effort – and no midwife or doctor. By this time, Stella had entered the second stage of labor.

The only person at Sabuli Health Center when they arrived was Mavis Ibkang, a community health nurse. “When they came, I was insisting that they should refer the woman to the hospital,” Mavis recalls. But once she examined the woman, Mavis changed her mind. “The membrane was broken and the head was showing,” she explains. “The baby was coming.” The team decided to proceed with the delivery notwithstanding the complications that might arise, as it was too late to call an ambulance from Jirapa Hospital. “That day, there was no way an ambulance could make it through,” Bertinus explains. “We were just praying that God should help us to deliver this woman.”

The team was able to deliver Stella safely without complications. “With God by our side,” Felix concludes, “she gave birth to a bouncing baby boy, and one could see the beams on our faces for a job well done.”

The team was relieved and happy. But the story wasn’t over. Stella had to rush back home that night, having left several young children behind without any adult supervision. Stella, her husband, and children live in an isolated compound surrounded by their farm with no neighbours for miles. “After I delivered, it was still raining,” Stella explains. “So we got something to cover the baby. And we came by moto back home.”

After this baby and this ordeal, Stella and her husband have decided to stop having any more children. Stella is currently on Depo-Provera injections, which provide contraception for three months at a time. She is planning, with Felix, to transition to a longer-lasting method as soon as it is available at the health center. 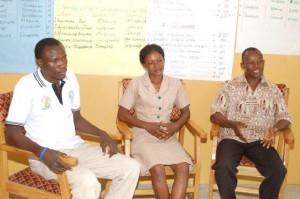 As the team of Bertinus, Felix, and Mavis looks back on that day, what was the most important thing they did, as a team, to save Stella’s life and deliver her baby safely? “It was teamwork,” Felix says. “As the saying goes, ‘Two heads are better than one.’ The community support was also very important. If the community members weren’t there to help us cross the river, it would have been impossible to get across.” They also added that the availability of two motorbikes at the CHPS compound, made possible by the good planning and resource distribution practices of their District Director, allowed them to succeed even when Plan A failed.

And in a larger sense, Stella’s life was saved because she had attended antenatal care – and understood the risks of attempting to deliver at home after multiple pregnancies. And the clinic was a welcoming place. As Mavis explains, “Some women complain to me that the hospital won’t let them squat the way they want to. If the woman wants to squat, we should allow her to squat.”