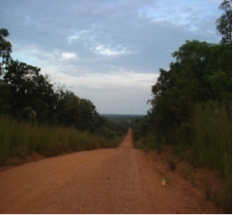 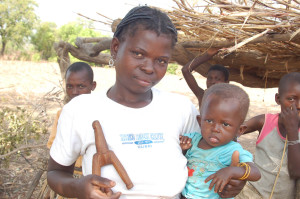 Aderinuru Zubetegr, a soft-spoken young woman, holds a small child on her lap. The child, almost one year old but looking much younger (and malnourished), holds a wooden toy in her hand – a simple, hand-carved stick figure. “It is the replacement of the twin who died,” the mother explains. “I will keep it forever, even after this twin is grown, or after she dies.”

Almost one year earlier, at around 9:30 am on Monday, March 2, 2009, Malary Dery, a community-based agent (CBA), came to the Samoa Health Center to check on a labouring woman, Aderinuru Zubetegr, whom she had a few hours earlier directed to the health center to access skilled delivery. [Samoa is in Lambussie-Karni District in the Upper West Region of Ghana.] “I learned that the woman was in labor,” Malary explains, “so I went to find out what was happening. I found the woman and asked why she wasn’t going to the hospital. And she said there was nobody to take her. So I pleaded with the woman to go to the hospital.”

Although the woman told the CBA she would go to the clinic, when Malary went to check on her at the clinic she discovered that the woman had not arrived. “I came to the clinic and they were not there,” Malary explains. “And I came back later and they still were not there. So I followed up a third time and I saw the woman lying under a tree, and a man was just standing by her.”

Why was Aderinuru lying under the tree? She had been in labor for three days by the time the CBA visited her at home. She was aware this was abnormal, but she did not go to clinic because her husband had travelled south and no other man could take her to clinic. Her husband’s male relative returned from the south that evening. “I begged the man to take me to the clinic,” the mother explains. He agreed, albeit reluctantly because he did not have the husband’s permission. The man pedalled the bicycle while Aderinuru sat on the back. They did not know the way to the clinic, so they got lost a few times. Then Aderinuru’s cloth got caught in the spokes of the bicycle, so the bicycle stopped working. By this time she was too exhausted to continue, so she lay down by the side of the road. “And that was why I was resting under the tree,” Aderinuru explains. “I didn’t know the CBA was looking for me.”

Aderinuru and her family had little idea of the risks of delivering a baby at home. She had had five previous pregnancies, with four surviving children, all home deliveries. Even though many community durbars (open community discussions of pertinent issues, convened by the chief of the community) had emphasized the dangers of unskilled delivery and the need for proper perinatal care, Aderinuru had decided to stay home and deliver. However, during labor she had no urge to push. Malary told the family to quickly transport the young woman to the health center at Samoa.

Thanks to the persistence of the CBA, Aderinuru finally arrived at the clinic shortly after noon. The midwife at the health center, Stella Maazugri, examined her and found that the woman was 6cm dilated. She also discovered that the woman was carrying twins. “She had only attended antenatal care twice,” Stella explains. She had received antenatal care at an outreach point near her home. “They hadn’t detected the twin pregnancy because she only visited twice.” What’s more, Stella could only detect one fetal heartbeat.

Around 6:00 pm, Aderinuru’s membranes ruptured, and Stella detected the baby’s head in the vagina. A baby boy came out “macerated and smelling offensively” – the baby had apparently died some time previously.

Examining the woman, Stella still detected a fetal heartbeat. About an hour and a half later, the second baby was born – a female, and alive. Aderinuru began bleeding profusely. Stella and her staff tried various procedures to try to stop the bleeding, but they were unsuccessful. The placenta was still retained so Stella tried to remove it manually – also without success. By this time, the mother was going into shock, and the bleeding – or “pouring,” in Stella’s words – continued.

“We were all exhausted,” Stella explains. “Everybody was soaked with blood. All my techniques were finished and I didn’t know what to do.” Stella called for an ambulance to take the mother to Nandom Hospital, but no ambulances were available; they were all out of the station, transporting other medical emergencies. Transportation of the mother by motorbike was out of the question. Stella’s calls to neighboring communities proved futile. “I even asked the CBA to pray,” she says. “Holy Mary, if you leave this woman to die, you’ll be in shame,” they prayed, as the woman went into shock again.

Finally, Stella thought of one more option: she saw a KIA truck pass the health center on the road leading to Suke so she called the health extension worker (HEW) at the Suke CHPS (Community-based Health Planning and Services) compound and asked him to intercept the truck and plead with the driver to return to Samoa so he could transport Aderinuru to Nandom Hospital. “That option proved to be a lifeline,” she says. Within a half hour, the truck arranged by the HEW arrived at the health center. “During this turn of events, the client’s relatives were not so supportive,” Stella recalls, because they had given her up for dead and could therefore not see the benefit in transporting her to the hospital. In addition, because of cultural taboos about touching a dead person, none of the relatives wanted to be near her. Nevertheless, Stella joined Aderinuru in the truck to monitor her on the way to the hospital. “In fact, around that period I was at my wits’ end. Due to the poor road conditions causing constant shaking, all needles [for IV fluids] eventually got out of the client’s veins.”

On arrival at Nandom Hospital, nurses rushed the mother to the labor suite. There the doctor attended to the Aderinuru for some time and eventually removed the placenta. She was transfused with three pints of blood. “As the client was being attended to,” Stella says, “I departed the hospital exhausted but grateful.” A few days later, when the CBA came to the health center and told the staff that the mother had recovered, the midwife and her team were ecstatic. “We are all then dancing here, making noise,” Stella explains.

Aderinuru survived, along with her baby girl, because of the persistence of Malary, the CBA, and Stella, the midwife. The story of this mother’s life saved spread quickly throughout the community. “We held a durbar in that community,” Stella explains. “And the woman herself came out and told the people that really, if she had not gone to the hospital she would have died. So going to the hospital to deliver is very good; they can save you.”

Yet Stella goes on to explain that the power of the story could have been very different if the mother had arrived at the hospital too late to save her life. “If she had died, it would be a very big problem in the community,” Stella explains. “Because they would think that the CBA has brought her client to the hospital and the client hasn’t survived. It means there’s no sense in going to the hospital to deliver. And the CBA going back to the community [would] not have any peace. They [would] be disturbing her almost every day.”